May 19, 2019
Want a versatile developer, that'll cope with any film and provide rock solid dependability? Maybe you should be trying D-23 Replenished!
D-23 has been around since the 1940's. Of the many people who used it Ansel Adams is perhaps the most famous. It's soft working, controllable, and fine grained. It's also forgiving of high contrast. Here's my favourite way to use it, not often done these days but I tell you, it's really worth it!
D-23 was formulated to be a better D-76. According to Anchell and Troop's The Film Developing Cookbook is was designed to be especially reliable as a replenished developer, the type of reliability commercial labs needed. D-23 in and of itself was stable, had similar fine grain to D-76, and provided good shadow detail whilst controlling highlights. It excelled in contrasty situations where other developers might run away and over develop the negative burning out the highlights. Furthermore, it consisted of only two chemicals, Metol and Sodium Sulphite.

(If mixing this, don't forget to take 2/3 of the water at 50c, then add a pinch of the sulphite, stir in then fully dissolve the Metol. Finally, dissolve the rest of the sulphite and make up to 1Ltr. with room temp. water)D-23's soft working nature and forgiving personality is complimented by a versatility that earns its place in any darkroom. It can be used as a stock developer for fine soft grain, with a similar look to D-76, or it can be diluted up to 1+3 for a different effect. These higher dilutions change how D-23 works on the film, moving from that fine grain developer (1+0) to a sharper developer (1+1) to an acutance and compensating developer (1+3).
Many suggest that the best dilution of D-23 is 1+1 but not me. No, the secret sauce is to use D-23 with replenishment!
Replenished D-23Replenishment is an old technique for using developers - pretty much forgotten these days, or misunderstood.
When films were developed in darkroom deep tanks or commercial machines the developer was "topped up" with a special replenishment formula. These replenishment formulas were created to allow the developer to continue working consistently for thousands of films.
Replenishment formulas were published and home darkroom photographers used them in their deep tank dunking systems. The idea was very simple. After a film processing session the deep tank was topped up to a filling mark with replenisher. This would go on for months even years, topping up The chemistry every week or so to keep the amount of developer constant in the tank. And this was where the magic happened. As the developer becomes "seasoned" with by-products (and of course the replenisher) it subtly changes. It becomes a unique mix, a magic brew, that endows the negatives with a certain look, a look that makes special negatives, unique negatives, unique to that photographer and that darkroom. No one, anywhere had that exact D-23 brew and could make those exact negatives. Now, some would say that's just crazy. They might claim such things as "lack of consistent negatives" or "the developer is no longer to be trusted". Well, all those millions of labs could never have been successful without replenishment. Try it! You will be pleasantly surprised.Here's how to replenish:Mix up and bottle separately a litre of D-23 and a litre of replenisher (DK-25R, formula below). - Use the D-23 at full strength (you can't use replenishment if you dilute the developer) for two or three films, pouring the used developer back into the D-23 stock after each film. This begins the "seasoning" process and starts building up the bromide by-products in the stock solution. For development times try D-76 stock times + 20%.
- Now, mark the top of the solution on the D-23 stock bottle, I use a sharpy. The mark will be near the top because it should be nearly full, remember you've been pouring the used developer back into the bottle. This sharpy mark will be used to top up the bottle after each subsequent film development.
- After the next film is developed first add 22ml of the replenisher (Dk-25R formula below) to the stock and then pour the "just used" developer back into the bottle, filling the bottle back up to the sharpy mark. You are now replenishing!That's it, you're replenishing! By adding 22ml of replenisher into the stock solution in the bottle, and then topping the stock back up to the mark after each film you are using developer replenishment. Your D-23 will become better and better with age. Note: For a while you'll be extending your development time a little until the stock settles down but it won't be by much. And run your film through the camera at a slightly lower ISO than box as you'll lose a little film speed because of the bromide by product but it's not a big deal. I run Ilford FP4+ through my camera at ISO 100 and develop it for 8.5 minutes at 20C agitating every 30 seconds. Like all developers, be prepared to experiment a little, with your favourite films, until you nail the exposure and development time. And then watch your brew do its magic.Do I use the developer (replenished) forever?I don't. After around 30 films I discard 3/4 of the stock developer and top up the bottle with fresh made stock. This means my "new" stock is already seasoned with the old. Some folk however, just keep on using it for years, replenishing as above. My fathers D-23 deep tank had stuff floating around in it but it just kept on developing the most gorgeous negatives. 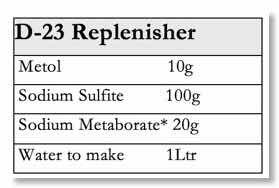 DK-25R, replenisher for D-23.
Take 500ml warm water (50C) and dissolve in a pinch of the sulphite. Then fully dissolve the metol followed by the rest of the sulphite. Dissolve the metaborate and top up to 1ltr with water. If you are substituting the metaborate (below) top up first using substitute then water.
*AKA Kodalk. If you can't obtain sodium metaborate then make a substitute by taking 350ml warm water (50C) and dissolving 14g borax and 3g sodium hydroxide. Use this to initially top up your replenisher to 1ltr finishing with water.Why not give it a try? You might find it's the best thing you've done for your photography in years.Important: Remember, do testing before committing your prize photographs!

Till next time, keep firing those shutters!John

Popular posts from this blog

8 Commercial Developer Replacements You can make in the darkroom

August 25, 2019
Well, today I got to thinking which home-brew alternatives could one use for commercial developers? Here's some ideas. What do you think?

1. Xtol/DDX
This one's easy for me! FX-55, perhaps Geoffrey Crawley's last public formula released in conjunction with Amateur Photographer magazine, it's the perfect replacement for these two commercial Ascorbate developers. It's fine grained, low toxicity, and makes beautiful negatives. Simple to make, this developer will save you money and make cracking negatives to print.

For an idea of developing times start tests at 7 minutes@20c. Don't test with important negatives!

Part A Stock
Sodium Carbonate  Anhyd. 15.4g (Mr Crawley said 20g of Potassium Carbonate but I find that harder to get)
So…
Read more

The history of two bath developers

September 16, 2019
In the early days of photography, people developed their photographs from single photographic plates. These were glass plates that fitted in the back of the (large format) camera and allowed the taking of a single shot. The plate was then carefully removed and another fitted. That plate would become a glass negative. Nowadays, most of us don't have single plate negatives to work with, we have multiple negatives all together on a single roll and this is why two bath developers were invented …
In the beginning
Photographic plates, as single negatives, allowed each to be developed individually. The plate is developed in a tray and given the exact development time needed according to the contrast range of the shot. If the photographer bracketed shots using several plates or took several shots at the same exposure, he or she could alter development for each using a trial and error system or by inspection. Therefore, when using these early plates or separate negatives it was easier to get…
Read more

August 25, 2019
With many developers now becoming unavailable maybe it’s time to think of a plan to always have one around. It takes years to get to know a particular developer well and really get to understand its nuances so one has to consider the problems if they discontinued your commercial favourite. It has bitten me many times...

The tale of the dying developers
My father would remember longingly of when Johnsons of Hendon made one of the best developers around; Definol, a fine-grained acutance developer. He would reminisce of using it for years and really getting to understand how to get the best out of it. Then, without warning, Johnsons ceased production. Little did I know a similar thing was about to happen to me.
I started learning from him how to make my own developers. I was very young, and it was fun at first. But, as I took more pictures I became bored with always mixing chemicals and so I looked around for an easier answer. I decided on using the Patterson chemistry of the time. Geoff…
Read more